Protest in Hasankeyf against unjust resettlement plans and Ilisu Dam
02.06.2015

More than hundred people from Hasankeyf and several activists of the Initiative from Batman gathered at the entrance to the rock castle which has been closed by the government since 2010 and lead to the decrease of the tourism in Hasankeyf. In the first speach by Cetin Kurtay, activist of the Initiative in Hasankeyf, the declaration has been critisized because it violates in several ways the rights of the population of the ancient town. Firstly the declaration has been approved by the government and not by the parliament which is one reason the level of violation is so strong. Then it differs between unmarried and married people. The unmarried have less rights concerning claims in New-Hasankeyf. The children are not considered in no way. Additionally there are uncertainties about the shops for the current shopowner promised in the new settlement area; how the new „touristic“ street will work? In general in the declaration and in all official documents of the government it is not determined what will be the income opportunities for the people in New-Hasankeyf. The situation the planned new settlements for the other villages is worse. Finally the amounts for the new apartments in New-Hasankeyf are significantly higher than the houses in the town of Hasankeyf.

In the second part of his speach Cetin Kurtay said that this declaration is unfortunately no surprise because the government never showed any respect to the affected people. The people of Hasankeyf are still principally against the Ilisu Dam Project which would be a catastrophe for ten thousands of people, the culture and nature. „Our struggle will continue and we declare to the president of Turkey: We will not allow you to build the Ilisu Dam“.

Afterwards, the first two candidates of the party HDP (Peoples Democratic Party), Ali Atalan and Ayse Acar Basaran, did short speaches and showed their solidarity with the struggle against the Ilisu Dam.
A short demonstration was done through the touristic street of Hasankeyf at which the participants shouted slogans like „Hes hes, edi bes“ (Dams, dams, thats enough) and „Hasankeyf is history and will remain our history“. The protest ended with a nature walk to the hills above the town. 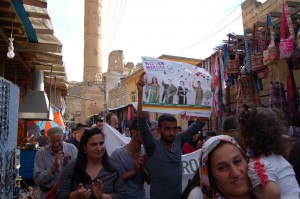 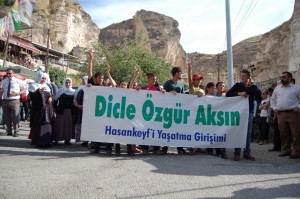